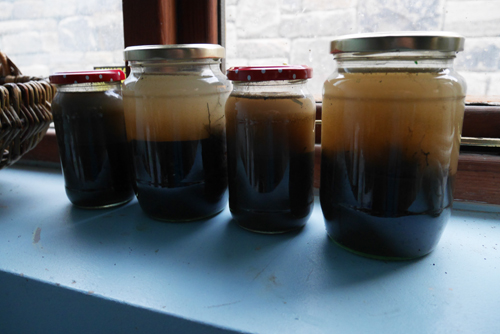 Before embarking on this project I had some knowledge of our soil as well as some major presumptions.

I presumed our soil was acidic and heavy clay, and that is was really thin and full of rocks.

Our fields have been used for pasture and have fed our neighbours cattle for the past few years. They get particularly waterlogged at the bottom of the slopes, but hold a lot of water all over (especially on any relatively flat areas) As well as numerous grasses, there is quite a bit of clover in the fields as well as thistles and a few docks. We also have ragwort which I’m striving to eliminate from our land (it gets less every year, but removing by hand is very time consuming)

Acidity –  the plants that grow around our farm (and thrive) are acid loving plants, heathers, bilberries and foxgloves. Also the rock is iron and manganese rich (our water rusts if not treated), and has a tendency to eat through copper pipe!

Clay – ground holds a lot of water, and if you walk about in the mud, it sticks to your boots making them really heavy with several inches of platform sole. Also, if you dig really far down you hit very sticky orange clay.

I didn’t want to plan purely based on my assumptions, so with the aid of two budding soil scientists, we set up a soil lab.

According to my reading, holds water, nutrients and plant roots well. However it can easily be washed away or become compacted. So, based on this, and the fact I can see my ground gets waterlogged, I need to think about how to handle it and improve it.

My first thoughts are:

Any other ideas will be welcomed!