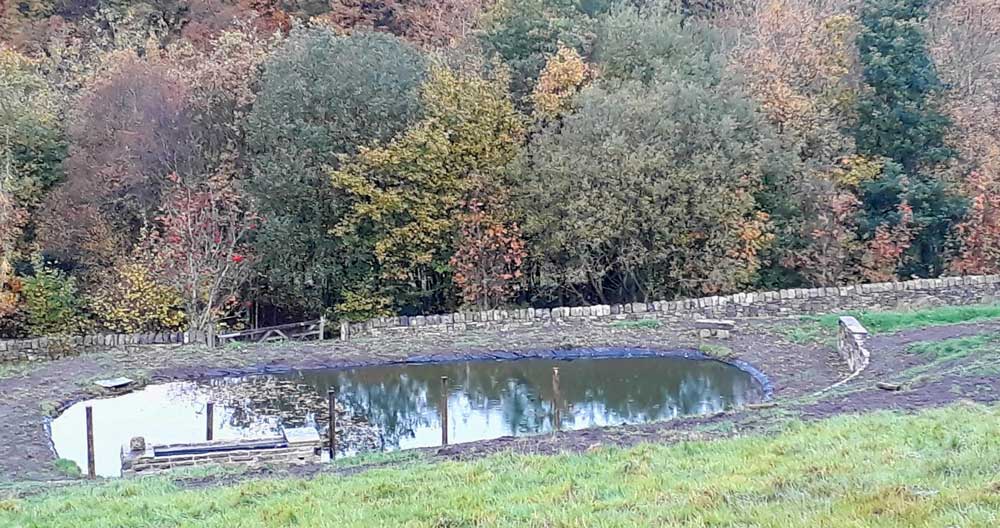 For some years I have wanted a pond on our land. In May, this wish started to become a reality.

Being at the lower end of a steep slope, we took some time to research the engineering aspects of placing a pond where we wanted it.  Thank goodness for the internet, there really is a wealth of information out there, but it does take a lot of time to trawl through it all.

The initial outline of the pond was pegged out so we could talk through what we needed with our friendly digger driver.

We know that we have some clay soil, but until the diggers went deep, we really didn’t know what we were going to be dealing with. I wanted the pond to be fairly deep for several reasons, but the main ones being ensuring a large frost free area in the depths of winter so that aquatic life survives, but also slowing the flow of water from the drain that flows through our land.

Unfortunately the lower levels of soil had large shaley patches and not enough clay to hold water which meant we would have to bring in a liner of some sort.

Because we were building on a slope, we needed to build a Contour Pond which meant that the soil on the upper side is dug out and used to build up a dam on the lower side. The dam must be strong because the
water level in the pond will be above the original ground level. We found the initial levels with an improvised tool, but later used a theodolite for greater accuracy. We also went for a basic shape, for ease of digging and for stability.

A lot of thought was put into how the pond would fill, and how it would cope with overspill. Luckily my husband is very technically minded, and came up with a cunning plan!

When it rains here, it can really rain, and the amount of water that flows down the hill is vast. We needed a way to steady the flow. At the top of the hill, before the drain disappears underground, we installed a filter. When the head of water is too great for the diameter of pipe that feeds the pond, it by passes the pond feed pipe and heads to a secondary pool where it eventually continues its way down hill. We also have cattle in the field on occasion, and we didn’t want them in the pond. The pond feed first fills a trough above the pond, and this trough then overflows into the pond. The pond in turn overspills via a pipe into the secondary pool. A fence will be built above the pond segregating it from the field and the cattle!

Stone walls have been built around the pond area to add to the seclusion, but also to hold back the field.

We managed to dig the pond during the driest summer for over a decade which was good for getting diggers in and out, but meant that we had to wait several weeks for the pond to fill. Because of the shaley patches, we needed to line the pond and eventually chose a triple layered LDPE liner. Laying it was a family and neighbourhood affair. The kids really enjoyed the challenge.

A couple of months in and the pond is looking great. We have sown white clover on the pathways and seeded the dam with wild flower seeds. The area above has been seeded with a Bumblebee forage seed mixwhich will provide food for bees and cattle. Pond plants are coming soon. The new pond has already been scouted by dragonflies; whilst water boatmen and water beetles already set up home.

It is going to be an oasis of calm.

One thought on “The pond”